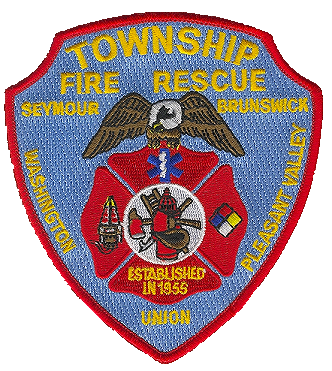 Township Fire Department, Inc. was organized on January 14, 1955 as a Wisconsin Corporation under Chapter 181 of the Wisconsin Statutes. It is a corporation without stock and not for profit. Articles of Incorporation were filed with the Secretary of State on January 20, 1955.

Prior to 1955, fire protection to rural areas around the City of Eau Claire was provided by the Eau Claire City Fire Department. A fee of $150 an hour was charged to the surrounding towns by the city. When a fire developed, one truck with 150 gallons of water and three firefighters would respond.

On September 27th, 1954, Dave Olson, the fire warden for the Town of Seymour bought a 1928 International fire truck from the Eau Claire Volunteer Fire Department of Fall Creek. It was kept at Mr. Olson's home and was maintained and staffed primarily by the Town of Seymour residents.

A rate hike to $600 per hour by the City of Eau Claire for fire runs outside of the city limits was one of the reasons that many organizational meetings were held by the surrounding towns during December 1954. On December 31, 1954, the City of Eau Claire was notified that the Towns of Seymour, Union and Washington had contracted with the Altoona Fire Department and the Eau Claire County Volunteer Fire Department for fire protection.

On January 14, 1955, a meeting was held to organize Township Fire Department, Inc. and to authorize the purchase of trucks and equipment. The towns in the organization were Seymour, Washington, Union and Brunswick. The 1928 International was purchased from Dave Olson and a new 750-gallon-per-minute pumper was purchased from W. S. Darley and Co. The officers for the newly formed Township Fire Department, Inc. were elected: Henry Graff, President; Charles Milward, Secretary; Arthur Donaldson, Treasurer and board members Robert Rossman and Herman Dahl. Dave Olson was named the first Chief of the department.

Chief Olson and Mr. Graff went to Chicago to pick up the new truck. "It has everything," Chief Olson said. "It carried 500 gallons of water and could pump 750 gallons per minute and it was the only truck in the area with heated cabinets for the booster lines." A tanker truck (tender) was purchased a week later and these three trucks and over 100 volunteers were enough to get the department started.

The Central Station on London Road was built so that the fire trucks for Station #2 (Town of Washington) were housed on the ground floor and the dispatcher's living area and office of the corporation were on the second floor. In 1986, the Town of Washington built a new fire station on Horlacher Lane and a new dispatch center was built nearby at 4601 E. Hamilton Avenue.  The new dispatch center was built as a duplex with one unit being used for the living quarters for the dispatcher and the other unit being used for the department's dispatch center, corporate office and meeting room. The Chief and Office Manager have an office in the building also.

In 1983, a "First Responder" unit (Emergicare) was organized. Please see link on home page for a description of this division.

As of 2016, Township Fire Department, Inc. operates five stations, 22 trucks (6 engines, 5 tenders, 5 brush trucks, 6 squads). One portable pump, 4 boats, 6 ATV/UTVs, and 145 volunteers. The first new engine purchased in 1955 cost less than $10,000 while the most recent engine purchased in 2011 cost $370,000. With the obvious increase in vehicle costs, budgeting for truck replacement is challenging.

The organizers of Township Fire Department were very forward thinking back in 1955. These five towns could have easily formed five separate fire departments but they chose to combine the five into one department. Currently the trend in the nation and in Wisconsin is consolidation. This is when two or more small departments combine to become one larger and more efficient department. Township Fire Department started out this way and has grown and become more efficient along the way.